HD fast normal ED normal. DNA gpr
We first saw Ricardo as a puppy in the nest at his breeders kennels. We expressed an interest in him and 12 months later we saw him again when he was shown at the British Sieger Show 2015. At this prestigious show he was awarded Best Puppy male.
Photo shows him  with handler Steve Cox
"Ricky" arrived in New Zealand the day after we got home, did his 10 days in quarantine, and very quickly settled in to life at GAVAROL, especially with his old kennel mate VENEZE LOLA. 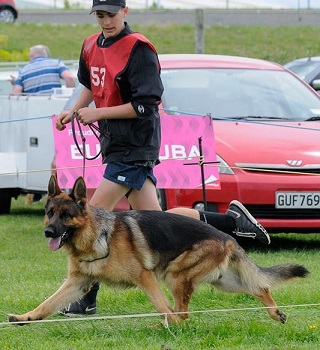